This won’t be in the “Trip Report” format that I’ve been using since all of these five spots are roadside stops that require little to no actual walking to enjoy them. Of course, in some places, it’s more fun to get down into the canyon and explore. But if that doesn’t appeal to you, or you’re trying to entertain your great grandmother for the day, these can all be viewed easily from a car or with less than ten minutes of walking over flat ground.

See, here’s the cool thing about having a good life (which is a term based on perspective), where you’ve been so fortunate to have so many great things and people in it. If you’re ever having a bad day, you just have to simply take a trip in the ol’ time machine in your brain and think of a good day and bam, you’re feeling a little better. That being said, there are some days that stick out as just a little bit better than other days. The kind of days that, at the end of them, you just know you’ll reminisce on when you’re old and wrinkly and gross, dealing with an abusive hospice care nurse in your nursing home where your grandkids won’t go visit you cause they’re sick of hearing  your mountain stories several hundred times. Yesterday was one of those days.

These days are typically unexpected and come out of seemingly nowhere. No one plans to make a lifetime-lasting memory. So at two in the morning on Sunday night, Colleen and I agreed that we’ve been burned out by work, school, and boredom and just needed to get out. We call it “itchy feet”, where we just want to go out and do SOMETHING. It happens three to four times a day for me, about twice a week for her because she’s an actual adult who possesses responsibility and perspective.

We decided to pass on a big mountain hike because let’s face it, it’s still cold as all hell outside. I don’t care how weak the winter has been, 20 degrees without snow on the ground is the same as 20 degrees with it to me. So we took a little ride up to Grafton Notch State Park out in Newry, Maine. If you live in Maine and haven’t been, get in the car right now and go. Grafton Notch is absolutely gorgeous (they don’t just make any dirt patch a state park) and is like driving through a postcard. Immensely popular in the fall for its breathtaking colors, winter time sees a drop in traffic. Colleen and I barely saw another soul all day.

Side note, if you don’t own a Delorme Maine Atlas and Gazetteer, either revoke your Maine citizenship or go and buy one for $15 at Wal-Mart. If you don’t have $15 for one right now, tell me and I’ll buy you one. Everybody in Maine should own one, and this day was made 10x better just by having the map. We visited five of the book’s roughly one hundred “Unique Natural Features” listed at the front of the book and didn’t even leave page/map 18 of the almost 80 maps in the book. Wrap that around your head.

I made the mistake of visiting Grafton Notch a year ago and not visiting Screw Auger Falls. I had just climbed Old Speck Mountain, the third tallest mountain in the state and worth a whole blog post itself, and all I wanted to do was get to a Subway and inhale some sandwiches. This tunnel vision really caused me to miss out, and I’ve been itching to go back and check it out since then.

It was worth the wait.

The Falls are forty yards long, only nine feet wide, and over twenty-one feet deep. You can feel the wild in this place, even with the road only fifteen feet behind you.  Reading all the trail signs about the logging history here, and the geological history of the area was fascinating for a couple of nerds like us. The best part was, it’s right there off the road. I’m convinced just about anyone could visit here, it’s even wheelchair accessible depending on how rugged your wheelchair is. Well, I guess any place is wheelchair accesible dependant on wheelchair rugged-ness and personal bravery. In the winter, it is a little icy, but not really challenging.

Another roadside stop not even five minutes driving time from Screw Auger, this attraction can be described as “cute.” It’s a cute little waterfall, in a cute little gorge, with some cute cliff faces. It’s worth the stop for sure, but after seeing the beauty of Screw Auger, it’s like the little brother that was never quite as successful as the older brother. 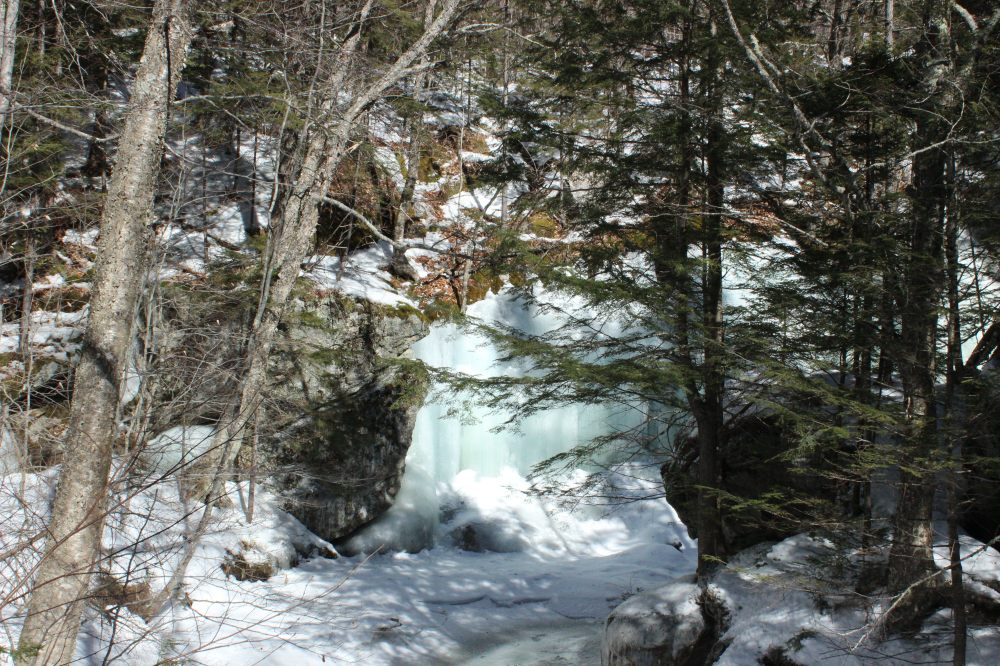 Oh boy. I didn’t know this place even existed until we got done at Screw Auger and consulted the Delorme. There’s a lot of Delorme plugs here, but I swear I don’t work for them I just adore the map. I think my family owns six altogether.

Anyways. Anyone who knows me knows that I think moose are just the coolest things since never ending breadsticks and salad at Olive Garden. They’re huge, terrifying, awesome, dangerous, majestic, the whole package.

So I was pretty pumped to visit this place. In my head, it’d be similar to Skull Island, which is shaped like a real skull. 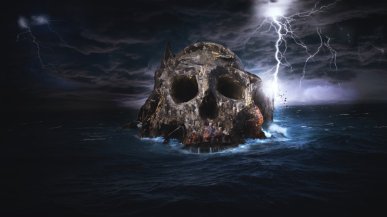 Yeah, kind of like that but more moose-y and hopefully less ominous.

I obviously had no idea what to expect, and the cave still somehow lived up to the hype. It’s an 180-foot slot in the bedrock of a mountain, with these huge boulders and a depth of close to forty feet. Much to Colleen’s displeasure, I ventured out onto a rock that was wedged halfway down the slot. I took an awesome picture down the gorge, however WORDPRESS DOESN’T ALLOW VERTICAL PICTURES SO I CAN’T POST IT.

Hope they heard that.

Here’s a less-awesome photo that has my ugly mug in it, but gives you an idea of what we’re dealing with here. 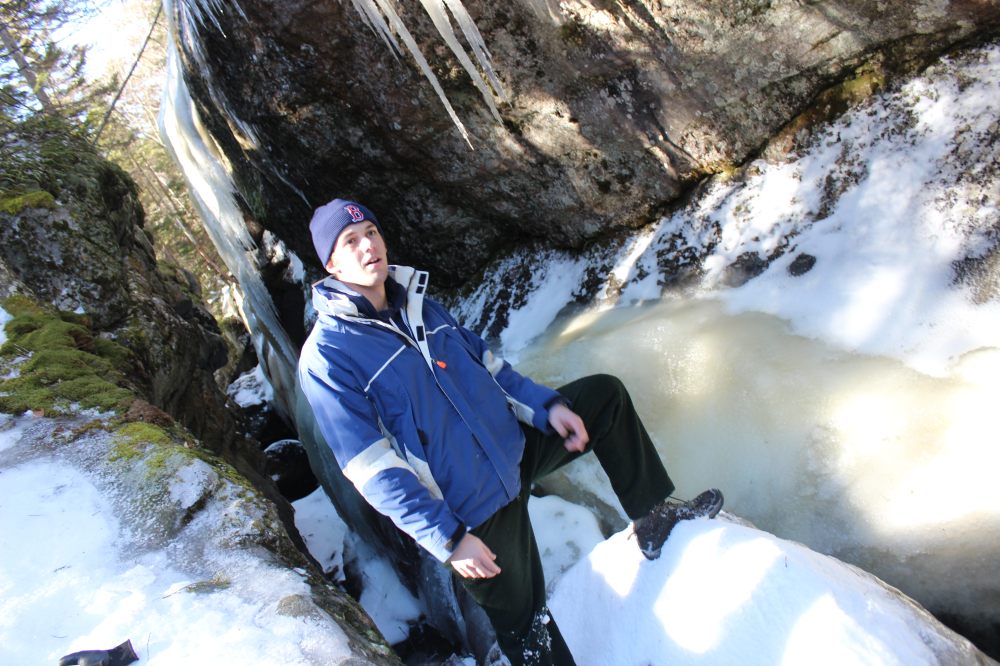 According to the sign, many a moose has fallen into the gorge and been eaten alive by the animals that roam down there. Just kidding. Moose do fall down there, but I don’t think there’re any creepy animals down there. Moose Cave involves the most walking, but it’s an easy ¼ mile loop.

This spot gets a ton of hype. I’ve heard all about it on the interwebs, people saying it’s comparable to the paradise that is Gulf Hagas (oh you bet your ass they’ll be a Gulf Hagas post at some point) and that it might even be cooler. So Colleen and I took a little jaunt up into Byron and checked the spot out. 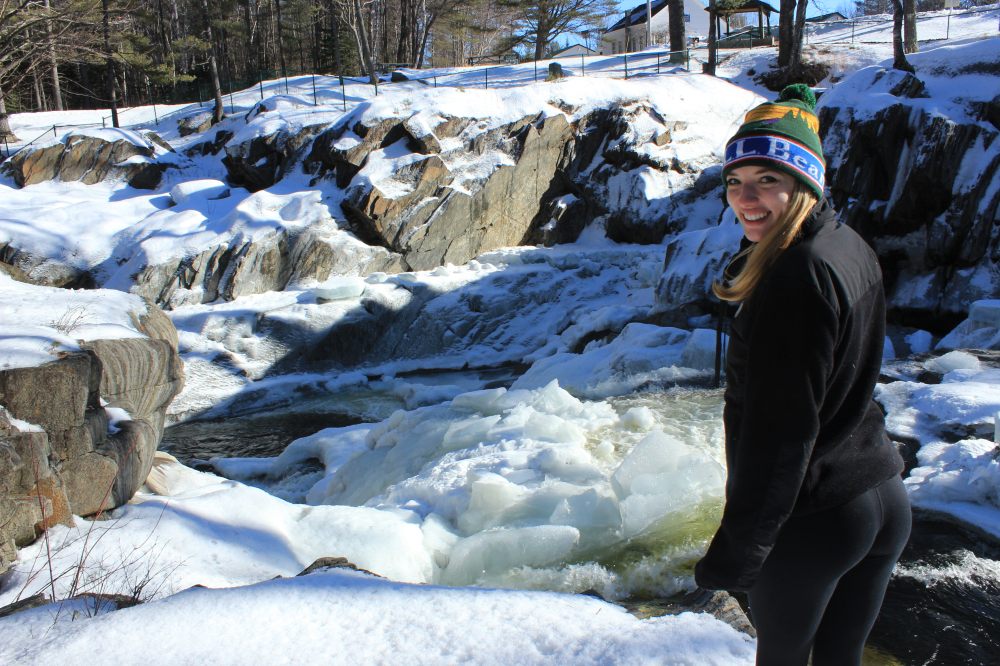 Now, this is a cool spot. There’s something about the raw animalistic fury of water that just gets to me. The gorge is over five-hundred feet long and enough nooks and crannies in the canyon walls to keep you busy for a while. Colleen was upset that I didn’t tell her until after we left that it’s an old gold panning site, so looks like we’ll be going back sometime to channel our inner-49er and strike gold.

The spot that most exceeded my expectations was undoubtedly Rumford Falls. 177 feet of beautiful cascade over huge granite blocks in the middle of nowhere. We drove over the river on Route 2 through Rumford, and just had to stop and walk out on the bridge to snag some pictures.

Had to go through Mexico to get there.

I love Maine and all it’s weird little town names. I had a French teacher who told me an interesting story about pâté chinois, which literally translates to china pie, which is the French equivalent of shepherd’s pie.  It’s called china pie not because it’s from China, but because it was introduced to French-Canadian railway workers in China, Maine. Take that for what it’s worth, but it’s a story that fascinates me.

That’ll do for now. Thanks for tuning into the newly minted LivinDeliberately.com and thanks for helping this little blog grow to over 200 visitors a month. Which might not sound like a lot, but I used to be psyched when I got 20 visitors.