The people were clamoring for it, so I delivered. And by people clamoring, I mean my mom asking if I was “ever going to finish your Guatemala posts” one time over dinner five days ago.

So, where we left off. Busses, sick gringos, and a three-hour drive up into the mountains. The scene is set.

We rattled into Antigua around 11 o’clock local time, meaning the city was absolutely on fire with activity. Antigua was founded in the 1500’s by the Spanish, so to walk around the streets of a city that’s older then the United States is pretty cool in itself. The thing about cities from the 1500’s is that they were made for the 1500’s. Weird, right? That means streets made of cobblestones, and not exactly designed with cars in mind. So the city is a little cramped, a little hectic, but otherwise marvelous. It’s colorful, it’s loud, it had beautiful architecture, beautiful churches  a ton of white people visiting, it’s surrounded by active volcanoes, pretty much everything you could ever expect in a Central American city.

My initial plan was to find a ride a few hours outside the city to the base of one of the volcanoes and climb up one of those big bad mamba-jambas. However, much to my mother’s relief I’m sure, the trip leaders vetoed that plan before you could say your-son-fell-in-a-volcano-and-he-dead-now. So I had to make due with a day in a beautiful Guatemalan city with enough money to  buy the whole town (one dollar is equal to 7.5 of the local currency). Life is tough sometimes.

I’ve gotten pretty good at bartering over the years, however, those old savvy ladies at the market still just about talked me out of every dollar I had. After Silas, Zach and I had our fill of shopping, our itch to get high began to come back.

Not that high, you cop.

We wanted to get above the city and see it from up high. We instantly set our sights on Cerro de la Cruz, or hill of the Cruz. Not to flex my Spanish knowledge too much.

Cerro de la Cruz sits on the far side of town, has a huge cross on it, and is the site of a heated turf war among the local gangs. So we bought some Cuban cigars from the marketplace and just started walking up it. Turns out we weren’t in danger during the day, as there were literally hundreds of people up there. The view was spectacular, and we managed to meet probably a dozen people up there. This included a couple who were traveling the length of the Americas, which is pretty impressive in itself.

The view was divine.

We headed down, grabbed some dinner, and then got back to the hotel before curfew. Then immediately left the hotel. What did you expect when you set an eight o’clock curfew? We grabbed some adult beverages from a local store (a local beer called Gallo with a big chicken on it, which taunted us all week at the work site with its advertisements everywhere), where we were offered a wide variety of drugs and women by a shady, albeit nice, gentleman with dreadlocks. We decided to just stick with the chicken beers for that night. I even bought a shirt with the chicken beer logo on it at the airport. 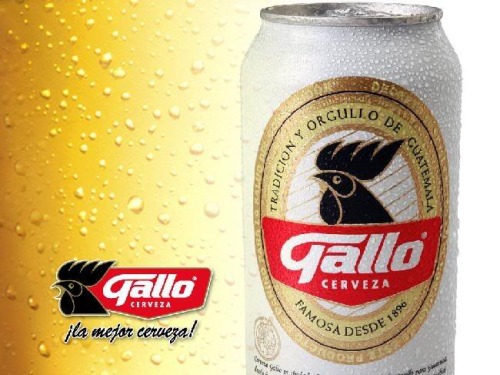 We headed to the roof of the hotel and listened to the wild tunes coming from the club next door (it was a Sunday night), and enjoyed a cool 70-degree night in Antigua.

As you can see, things are pretty dope right now. I can remember at this moment thinking that it couldn’t get any better than this. Fireworks going off, a bunch of really great people around me, hell the club next store even starts playing Chance the Rapper, my personal favorite musician. Things were pretty great.

Then, wouldn’t ya know it, one of the volcanoes erupted.

I didn’t take the picture, someone on the trip did (GoPro’s don’t exactly zoom), but I can tell you that the picture doesn’t even capture how amazing it was. Pitch black night, boiling red lava coming up from the center of the Earth, heat lightening lighting up the volcano’s summit. I’m not sure I’ve seen anything cooler.

The next day was boring in comparison. Lots of time in airports, lots of custom forms, lots of baggage to keep track off. One of my favorite parts of traveling is actually getting home and seeing the people I love, so having Colleen waiting for me at the baggage claim in Boston for the first time in our relationship just about rivaled seeing that volcano in awesome-ness.

Thanks for tuning in guys, I’ve you stuck through three installments of this then you’re probably my mom. If you read all three and AREN’T my mom, you’re honestly the bomb.

If you haven’t seen the trip video, I’ll put the link here.

Sarah Comtois, a very talented friend of mine, made her own video and I think it’s cool as hell. So if you want even more Guatemala action, her video is here.

Again, thanks for the time, you guys are the foundation for what will hopefully turn into a successful blog.